"Mom, did you know only male crickets make noise?"

"Bees do a butt dance to tell the other bees where the flowers are."

"Sharks are both nocturnal and not.  Because they have to swim at night or they would die."

Email ThisBlogThis!Share to TwitterShare to FacebookShare to Pinterest
Labels: Zeke

Nine is the Indian Summer

Nine, almost ten.  My big kids have never been this age before.  That sounds like such an obvious statement, but isn't that the truth of every stage our kids go through?  And shouldn't we be ready to recognize that, to enjoy and savor things a bit just because it's never been this way before?

I can't help but feel that this age is the age of standing on the cusp of jumping off and flapping their wings.  It seems like the tween and teen years are just around the corner, like we are living in the shadow of those years already, not because those years are dark and scary but just because they are on the horizon and quickly approaching.  In fact, in some ways, the looming of those years is a joyous thing, because in the moments of yesterday and today, I can see just who my kids are becoming.  I can't help but be filled with anticipation over watching their personalities and souls unfurl in front of me in ways that didn't happen when they were younger.

Like the last lazy days of an Indian summer, where we sit cross legged on the porch, enjoying the warm night air, gazing at the white moonlight and the pale off-again-on again glow of fireflies, I want to drink in these days, knowing that the end of this stage is near.  I can't help but smile as they answer the neighbor girl's question, wholeheartedly affirming that "Yes, let's make our bikes be horses.  Mine's going to be Buck!"  I purse my lips a bit in amusement when they pick Peppa Pig or Paw Patrol on the tv, so thankful that they enjoy those "baby" shows.  My eyes twinkle as I see them playing make believe with action figures and Barbies, climbing into blanket forts and crafting signs from post-it notes for an imaginary store.

Relish.  Contemplate.  Breathe deep those moments.  Soon these days will be gone.
Posted by kayder1996 at 10:10 PM 1 comment:

Peanuts and the Haitian Economy

Pssstt...got a minute?  Care to hear a smidge about how our U.S. economic policies sometimes have unintended consequences for other nations?  I know it sounds like a riveting topic but it's not quite as boring or complicated as it sounds.

The reality is that anytime a nation creates policies, be they foreign or domestic policies, there are often unintended consequences.  Implementing a policy often means that it touches the far corners of the room, impacting areas in ways no one intended or in ways no one could have predicted.  Sometimes, those unintended consequences are like extra spoils, taken from a treasure chest.  Other times, they reek havoc.  There is always a thread connecting the policy to all of the potential affected parties.

The USDA has recently announced plans to implement a policy connected to peanut production in the US that is going to pull a lot of threads for the farmers of another country.  Specifically, because of the way we do agriculture in the US, we will be subsidizing bumper crops of peanuts by buying those peanuts from our domestic farmers and then exporting them to other countries.  At face value, it seems like a win-win.  The US will buy peanuts from peanut farmers to help them from going bust while shipping them to a food poor country like Haiti where those peanuts will feed hungry people.  But here's the catch:  one of the major agricultural industries in Haiti is peanut growing.  This means that by flooding the Haitian market with US grown peanuts, Haitian peanut farmers will be selling their peanuts in a weakened market.  For countries like Haiti, that have fragile economies, where small businesses struggle such unintended consequences can be devastating.  (See this Washington Post article for more information.)

Unfortunately, this isn't the first time this has happened.  Haiti's native hog population was decimated by a USDA policy that was meant to prevent the spread of swine flu the late 70's and early 80's.  Specifically, native pigs were killed off and US grown swine were brought in.  Unfortunately, the US swine were not as hardy as the native variety and were much harder to feed.  This resulted in hog farmers in Haiti being driven out of business.  The US has also flooded the Haitian market with another product:  rice.  This happened in the late 80's; cheaper American rice drove Haitian rice farmers out of business.  And as a side note, most Haitians still struggle to afford rice.

To be sure, I'm not offering an opinion on if farmers should be subsidized or if certain tariffs are correct.  But I do think that are officials should consider how our policies affect our neighbors, specifically how our policies will impact the poorest country in the Western Hemisphere.

There is currently an online petition being circulated, asking the White House to stop the plan to export our peanuts to Haiti.  It takes less than five minutes to sign and is one way in which you can ask our government to try to avoid policies with unintended consequences that will negatively impact Haiti's economy.  Here's the link:   Haitian Peanut Petition.

Early last fall, Kai was showing a lot of signs that he was ready to potty train.  However, after a month or so of trying, it became clear that he was too busy to be serious about potty training.   I was not about to spend my days wrestling a barely two year into the bathroom, struggling with him as he yelled and cried about not wanting to go to the bathroom.  So we stopped.

We're trying again now.  I actually stumbled on some good advice from one of the major diaper brands' websites.  Usually commercial sites are pretty uninformative and generic but this one from the company that makes Pull-Ups was actually helpful.  It provided you with a quiz to take based on your child's personality and then offered up strategies based on what might best help your child.  So much better than the one-size-fits-all advice you often get.   The quiz suggested that Kai was a squirrel (I already knew that...) and that he moved from one thing to the next quickly and needed things to be interesting and creative in order to keep his attention.  (All true, whether potty training or not.)  So combining some of the advice from the website plus some other ideas from other places, we're back at it and things seem to be better than before.  (I'm probably jinxing myself by just writing that.)  Specifically, we are working to make potty training as much of a game as possible.  When at home, I've let Kai be without pull ups or pants as much as possible.  We've been playing a game with this, a version of the Student-Teacher game if you are familiar with that.  If he potties on the floor, then Mama gets a star.  But if he uses his potty, then he gets a star and an m and m.  I used my chalkboard wall to keep track so he can easily see the stars and I've been pointing out who has more every time so it keeps that feeling of a game.  A flat out mess on the floor seems to be more concrete than the idea of keeping a pull up or pair of underwear dry.  Now that he seems to be doing pretty well with that, I'm anticipating switching to getting a start for keeping his underwear dry in the next few days and forgoing the bare bum.  The other thing I've done is playing a game called "Find the Potty."  Instead of keeping the potty in one set locale, every two or three uses, I hide it and then ask him to find it the next time that I prompt him to use the potty.  He's really liked searching for it in the different rooms around the house.  It's definitely helped with being too busy playing to want to stop to potty since stopping playing means playing a game instead of being interrupted by a task.  I've seen lots of stuff on incentivizing using the potty but nothing on the idea of it needing to be a game; so far, making a game and not about rewards has seemed to help.

Of course, we've cleaned up pee, and I have had to be okay with a bare baby bottom touching lots of things in my house.  But the biggest oops came today courtesy of Bo.  Kai went poo on the potty all by himself, with no prompting.  In the middle of all of us cheering and encouraging him, Bo marched right over to the little potty and promptly ate Kai's deposit.  And so while we won't be shaming the baby regarding potty training, we will be shaming the Basset Hound.  Soooooo gross! 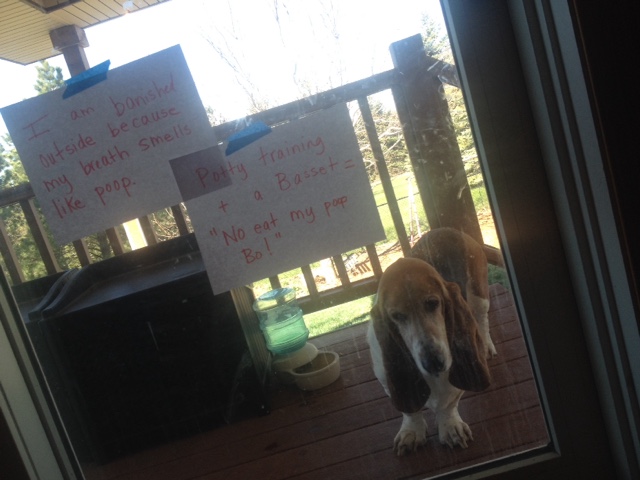