Mom confession:  it really is true that your younger children don’t have their childhoods documented in the same ways as your oldest.  Truth be told, Kai is the most comedic of my kids but I rarely write down the things he says.

Today's funny happened when I asked him to get ready to go to his friends house and he emerged from the bathroom, zooming around, proclaiming he was Superman and that he had made his hair just like superman’s.  Can you see the swooping curl in the center of his forehead?  Just like Superman... 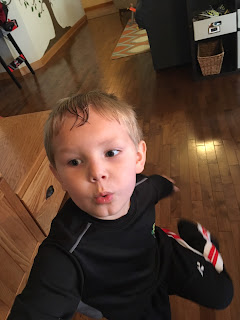 A week ago, it was a literal interpretation of the figurative.   Kenson accidentally bumped into Kai and said, "Sorry, I didn't see you there."  Kai looked at him with furrowed brows and replied, "Yes you did!  You have two eyes!"

Taking a quick picture while he brushes his teeth seems appropriate.  He's always saying and doing something.  No time for posing with Mom. 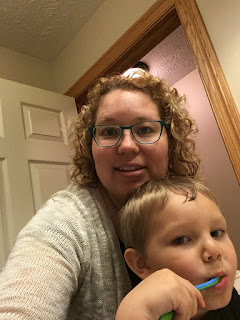