Email ThisBlogThis!Share to TwitterShare to FacebookShare to Pinterest
Labels: holidays

My No Brainer, Sleep Deprived Mom Moment of the Week

Of course, two of my kids got permanent marker on their clothes.  Normally, I would have just left well enough alone and accepted the fact that those clothes were now stained with marker.  But with the full power of the internet at my disposal, I thought I'd see if I could come up with some homemade remedy to permanent marker.

Hairspray is a great ink remover but I wasn't so sure that it would work on permanent marker.   (It's great on ballpoint ink, though.)  A couple of the websites recommended soaking the affected area in milk.  I was pretty sure I'd seen science projects where milk and ink did interesting things so I figured I'd give it a shot.

Then I saw a website that advised mixing milk with vinegar.  Now, I love vinegar.  It is awesome for a lot of cleaning tasks.  So in my brain, this seemed like the method to try.  I found my favorite retro polka dot bowl, filled it part way with milk, submerged Kenson's yellow shorts, and then poured in my vinegar.  About the time the vinegar hit the milk, I remembered that for baking purposes, vinegar + milk = buttermilk or sour milk.

Um, yes, I just decided to soak my son's shorts in sour milk.

It is now a clumpy, curdled, nasty smelling mess.

But by golly, it's already done so I'm leaving it overnight...just in case it actually works.

No Clipping, No Mess Couponing

With one income and 6 people to feed, couponing is a must around here.  I am not a crazy coupon person, not like the ones you see on tv who have huge stockpiles or who dig through the dumpsters looking for coupons.  I also don't have the time to drive to a bigger town and hit the sales at every store.  I price match, clip the weekly coupons from the Sunday paper, and occasionally make a trip to the big city if the price is right on an item I can't price match at our Walmart.  I knew there were some couponing type apps that existed for smart phones but since I was the proud owner of a flip phone, I didn't really know much about them.  I also operate on the belief that if I have to invest too much time or too much gas into saving money, then it's really not saving me money because my time and gas matter.  So I wasn't willing to invest the mental energy into sorting out the apps to see if you could use them without a smart phone.  But then the flip phone died.  I ended up with a smart phone.  About that time, Groupon launched a new couponing app and it seemed like a good time to check out the potential of the apps.

It might seriously be one of the easiest ways to save money.  I have four savings apps installed on my phone.  Each one is pretty easy to use and operates on the same basic idea.  Buy an item.  Log into your app.  If the item you bought has a coupon, select that item.  Scan your receipt.  Have your receipt approved.  Wait until you have accumulated the appropriate amount of money in your account, then cash that money out.  Each one is a bit different in that they might have different dollar amounts before you can cash out or different ways to get you the money.  Ibotta and Saving Star require that you shop at specific stores.   Savings Star does say that while they will not prohibit you from using a paper coupon and an app based coupon on the same item, that does not reflect the intent of most manufacturers.  Several of the apps have ways for you to earn extra money by reading informational articles or by referring friends.  I don't really base my shopping lists off of the coupons that are available on the apps.  But I do peruse each one prior to shopping.  Aside from being an easy way to coupon without actually cutting any coupons out, many of the apps offer coupons for produce and milk, which are things I often do not get in the Sunday coupon inserts.  I like it a lot better than the Target couponing app, Cartwheel which requires you to show the cashier the coupon on your phone.  I like that I can scan my receipt at my convenience, also known as "when my children are not around."

Definitely worth checking out-

Email ThisBlogThis!Share to TwitterShare to FacebookShare to Pinterest
Labels: Frugality

The Magic of Fall

A low hanging sun starbursts through the pines.

Evening hours creep in earlier and earlier each day, those waning hours the backdrop for a million scenes.

Fabric scraps pilfered from mom's sewing stash become flags for a game of flag football, where an 8 year old proclaims that he loves this game because as coach, he gets to boss his sister around.

A garden hose is dragged through the too long grass.  In an instant, it's a fire hose as little hands urgently work together to extinguish some blaze.

Short and fat, tall and long, sticks of all shapes and sizes become this week's treasured objects, useful for training as ninjas and battling dragons.

That is the magic of fall. 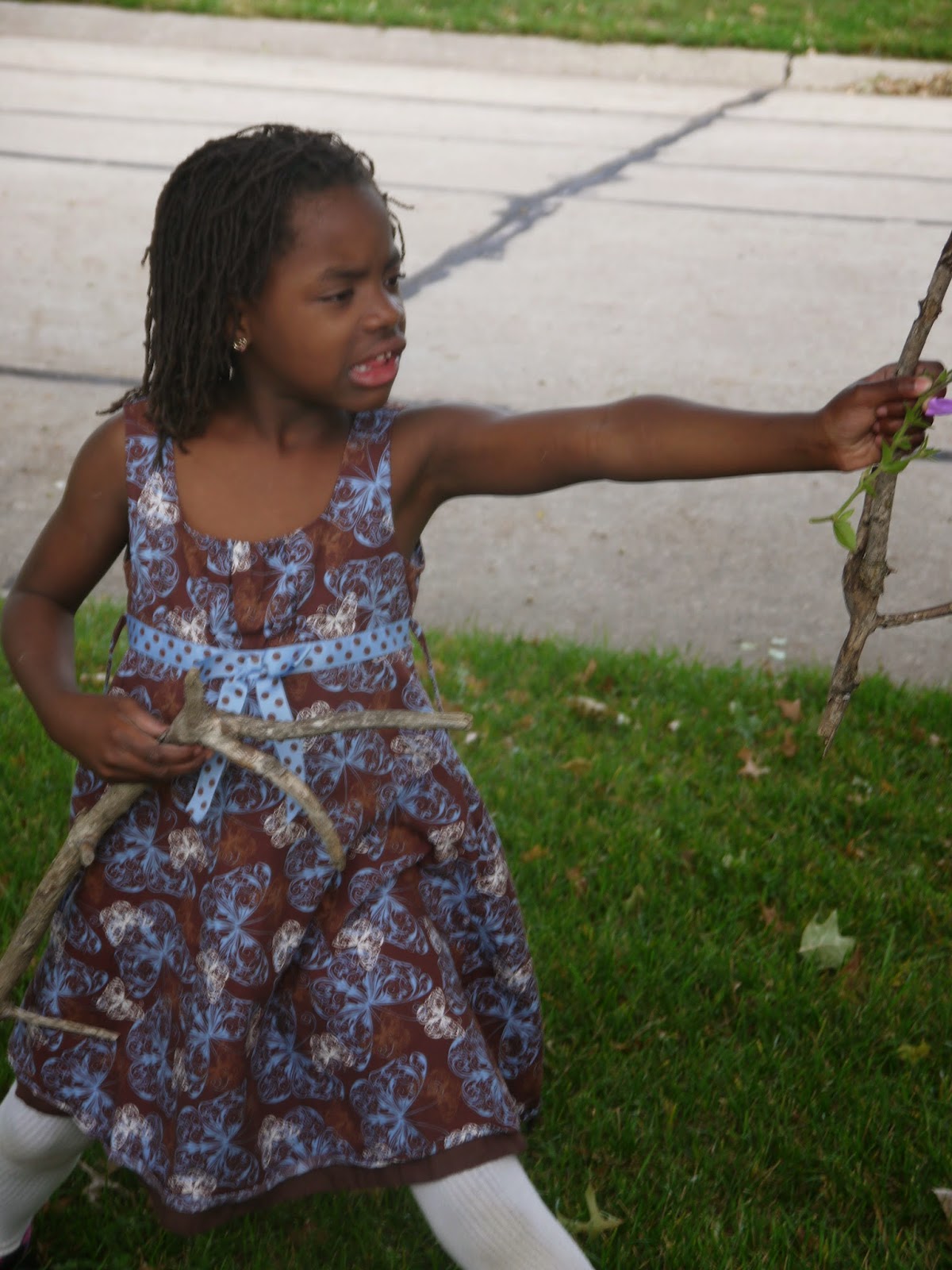 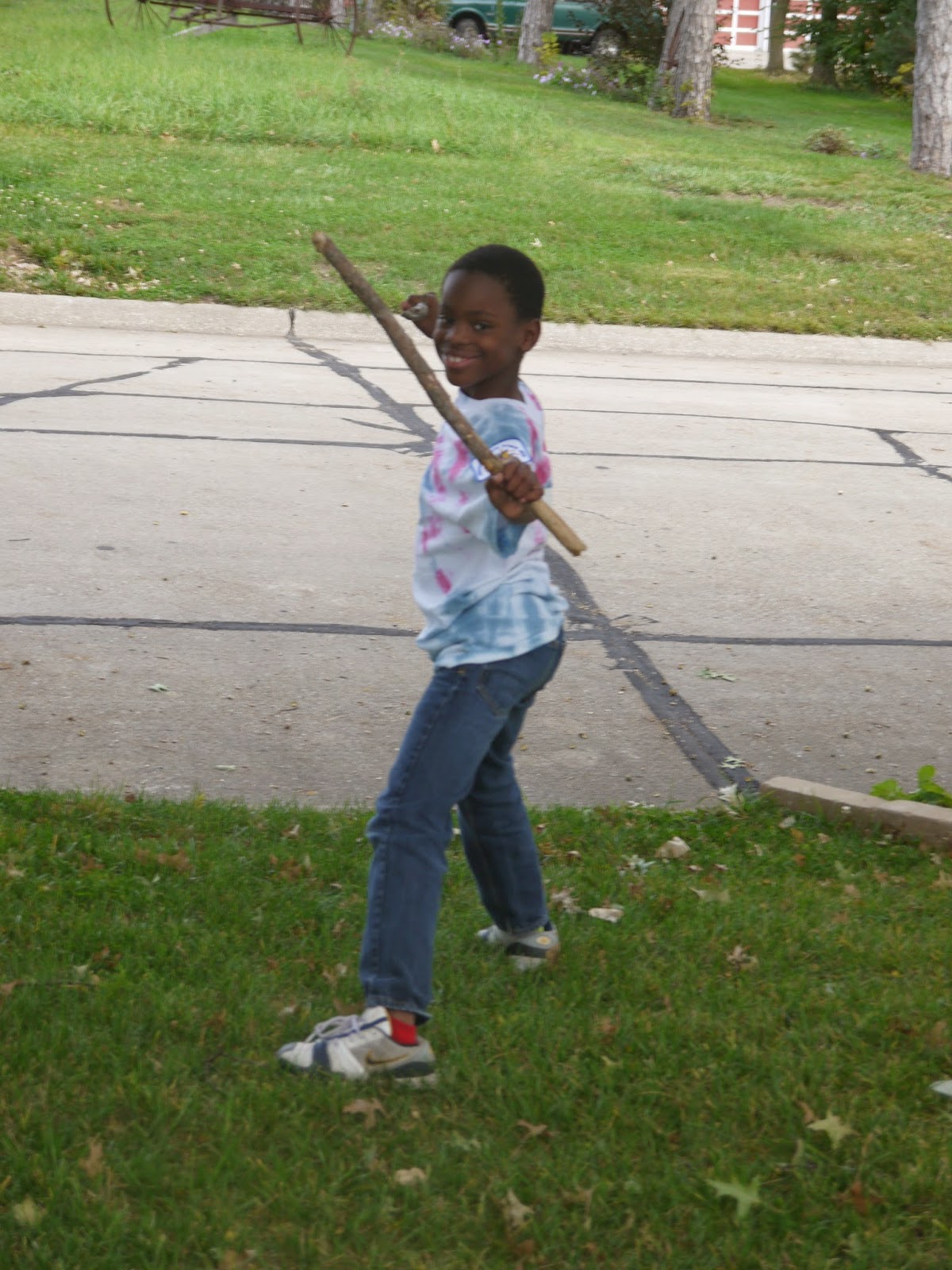 It seems like I am forever rearranging things around this joint.  I organize something and then decide that however I had it positioned is not functional.  So I reorganize and then reorganize again.  Case in point:  the boys' dresser.  They've had this dresser in their room forever.  I originally had a few items on the top:  the Haitian wood boat, some Walmart canisters that hold army men and army planes and tanks, and a panting Kenson made.  But the boys kept piling stuff on top of the dresser and everything would get knocked off and it just looked like a mess.  The other issue was that the boys had books in their room on a bookshelf but Grabby McGrabberson aka Kai was creating a disaster with the books.  So plan a was to organize the books and plan b was to organize the treasures that my kids had that we wanted to dispaly.  The books are now in the boxes on top of the dresser.  The army toys are still in their home beside the boxes.  (Seriously one of the best and easiest storage tricks ever.  It's just a Walmart canister that had a white lid.  But I spray painted the lids brown and they just look so much nicer.)  I knew I wanted a shelf of some type to hold the items for display since a shelf would keep the objects out of little hands and free from the danger of being knocked around.  And guess what I found in my garage?  An old shutter and 2 wrought iron fence brackets.  So I made a shelf for zero dollars, which makes my heart happy.  Now the shelf has the Haitian boat, Kenson's painting, two magnet boards for photos of the boys' foster/birth families, the alarm clock (which was forever getting messed with), Zeke's trophy for being an honorary coach at the Shrine game this summer,  and a fish Zeke painted during his hospital stay at Mayo.  I guess I'm now content.  Until I decide to rearrange again. 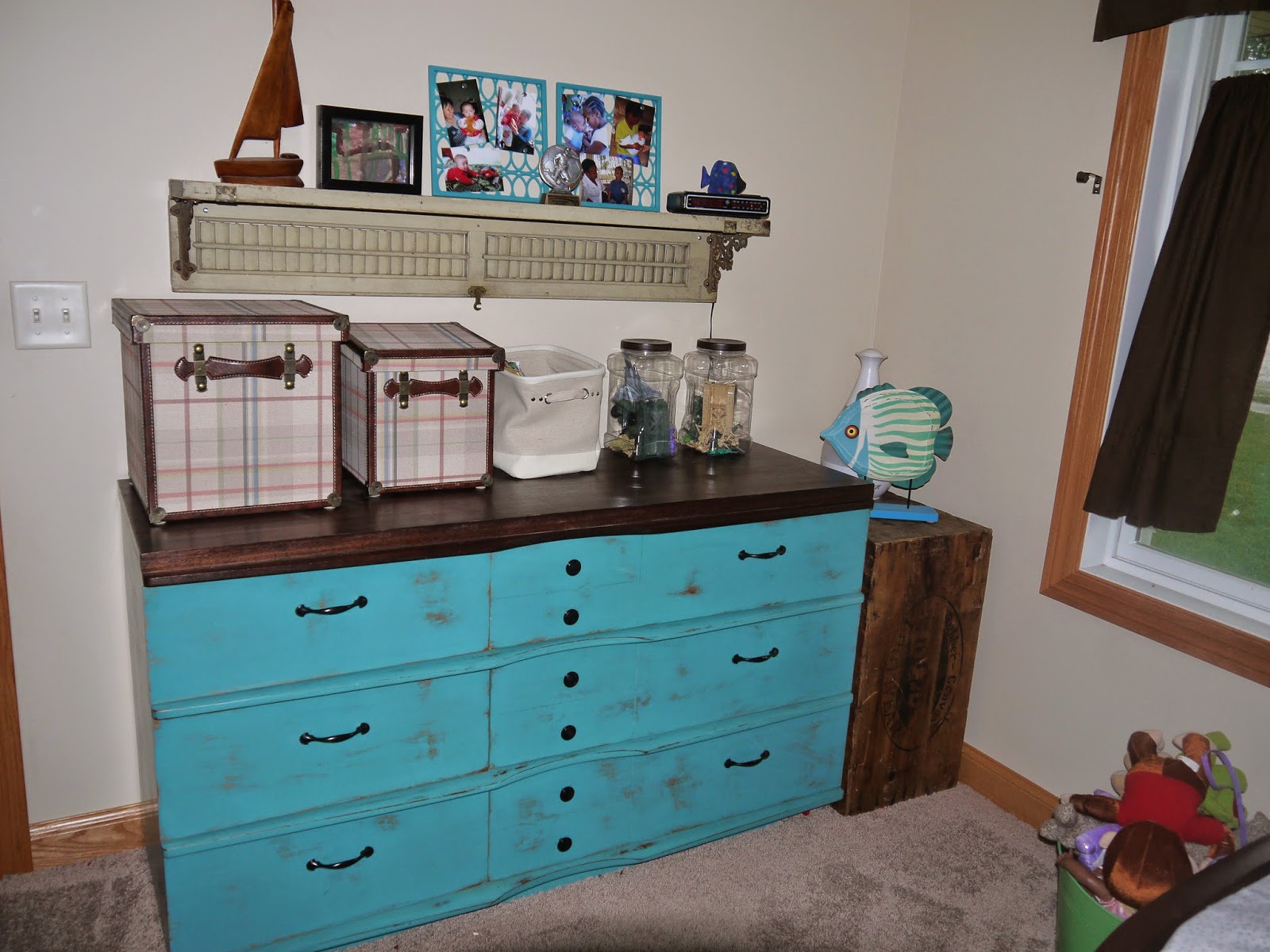 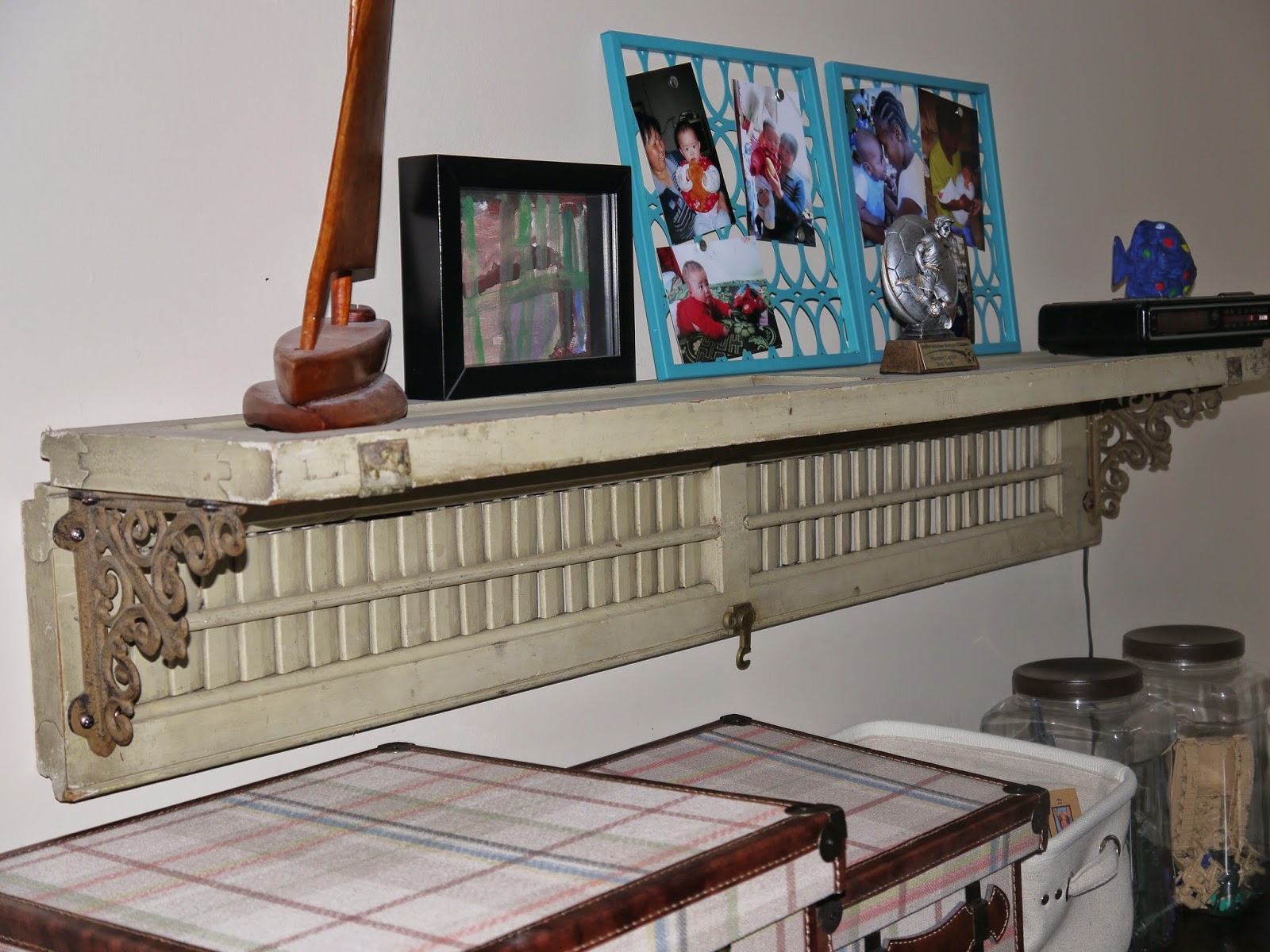 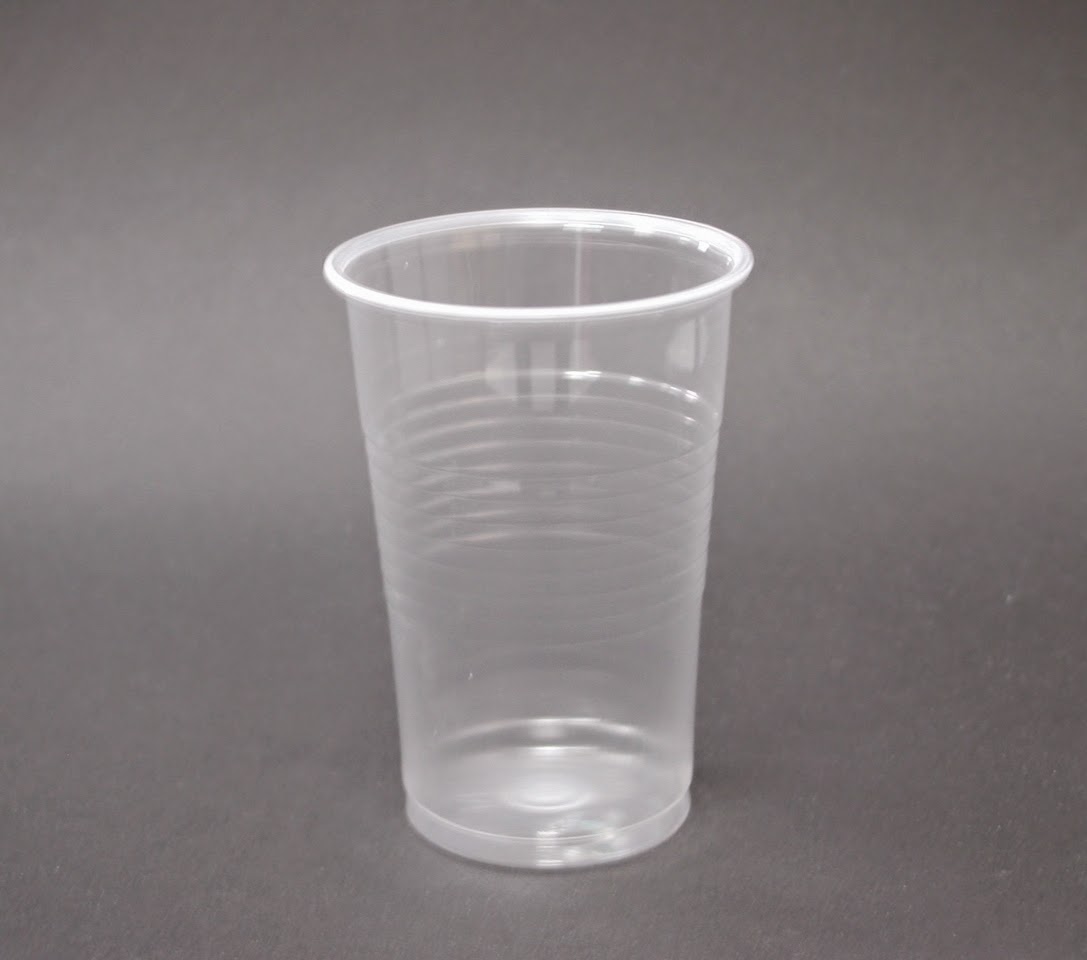 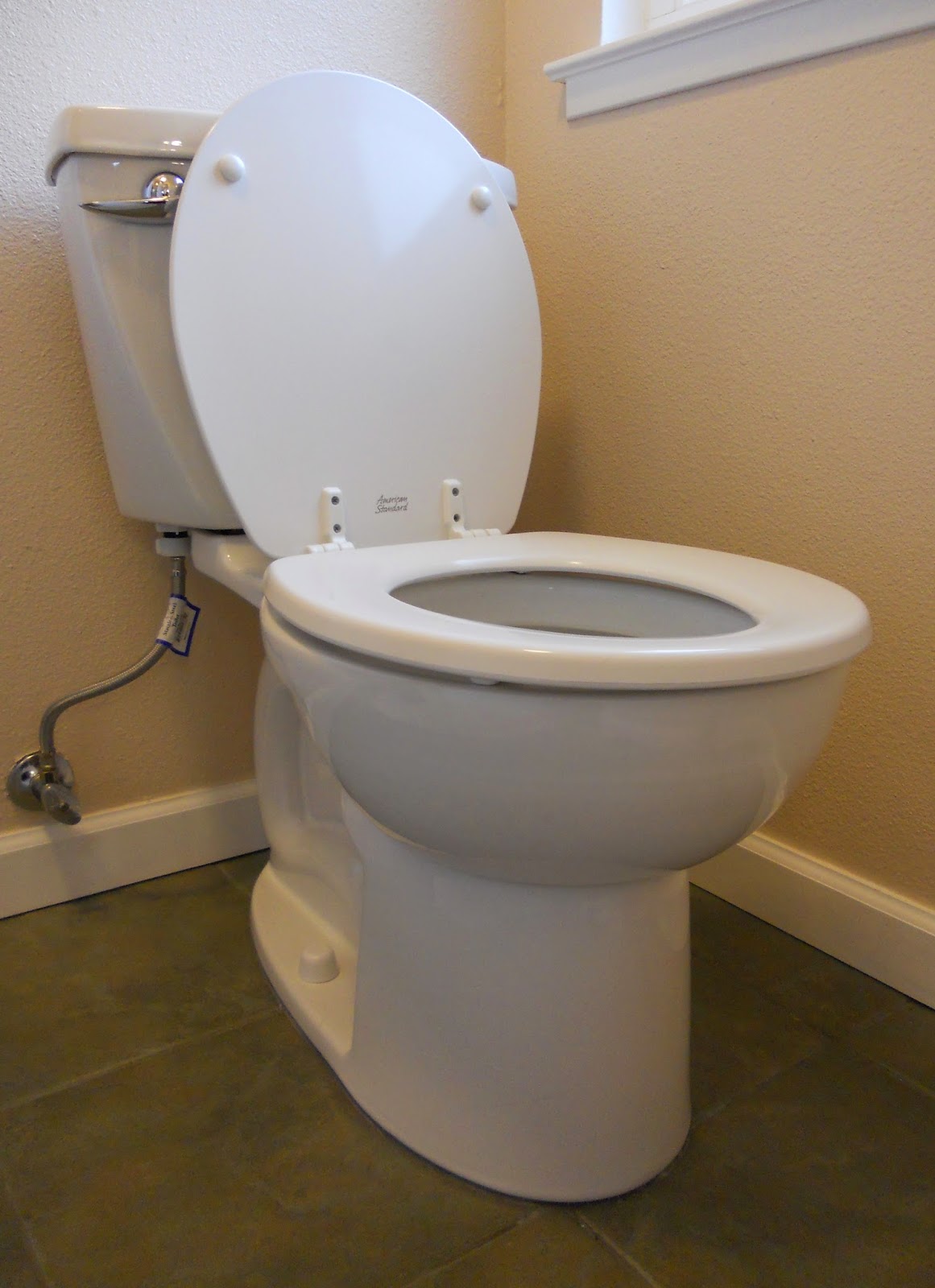 As I was getting ready this morning in the master bathroom, I heard Kai coughing so I headed out to see what was going on.  Sure enough he was coughing.  Holding a cup, standing in front of the toilet with the lid up, coughing.  Because he apparently dipped the cup in the toilet and drank it.  Yes, it was clean water.  No, I did nothing other than move him out of the bathroom, shut the door, and use hand sanitizer on his hands.

Linky Love-What we Need to Tell Our Daughters

Love this post by my friend, Kathy.  She shared her thoughts on what girls really need to hear but then she stepped it up a notch by sharing links to books that help to promote those things with in pre teen, tween, and teen girls.  It's a great list, one I'm tucking away.  One caveat-I think Kathy's post underscores great Biblical principles for raising girls.  Of course, the biggest principle is "Love God, love others, love yourself."  Relationship has to trump rules.  It's why Micah 6:8 is one of my regular prayers for all of my kids, that they would learn that God wants them to act justly, love mercy, and walk humbly with Him.  Anyway, just thought I'd share.

What We Need to Tell Our Daughters
Posted by kayder1996 at 2:58 PM No comments: