Earlier this month, our church planned a fall event with the goal of targeting young marrieds with young kids.  This information and description were included in the announcement on Sunday.  Our children were apparently listening because as we were at the dinner table discussing whether or not we would be attending, they were all quick to point out that we were not young parents so they were not sure if we were invited.  Yep, we're old.  Old parents with young kids.  Reminded of that daily as I chase the two year old.
Posted by kayder1996 at 7:44 PM No comments:

If your parent is a teacher at the elementary school you attend, you should probably not explain your late homework by saying, "My parents don't allow me to do homework at home over the weekend."
Catching grasshoppers in boxes, empty water bottles,  and old ice cream pails and planning to sell them for $1 each may not be the get-rich-quick scheme you had hoped.  Apparently, the grasshopper market in Nebraska is pretty saturated. 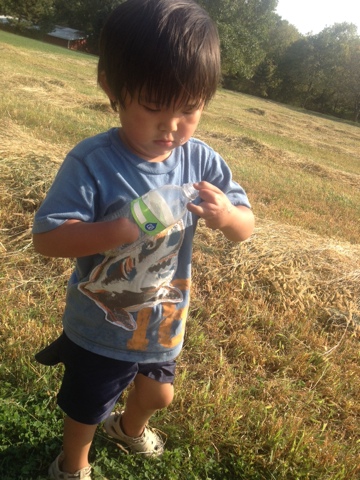 From Son up to Son Down

"Mamas of little boys work from son up to son down."

Perhaps true of all children, not just of boys, but Kai has us on the move.

A sample of our words from Saturday and Sunday...

"Get off the gate."  Said as he had climbed up on the wooden garden gate and was almost all the way over, to the other side.

"Don't hang on the drawers."  Said as he pulled out the kitchen cupboard drawer and was pulling himself up, with the drawer extended, literally hanging off the end.

"Get down from the fence."  Said as he was about four links up on the chain link fence, getting ready to do his Spiderman moves across it.

"Don't stand on the swing."  Said as he stood on the glider on the swing set, feet up on where you should rest your hands, hands up on the chain that suspend the glider from the top bar.

"How did you get outside?  And stop riding your bike on the back deck."  Said as he tried to ride his bike on the small grill deck we have just above those ten back stairs.

"No climbing over the couch."  Said as he flopped one leg over the top edge of the sofa and jmped down.

"No jumping on the equipment."  Said as he tried to jump not one, not two, but three stairs on the middle of the playground equipment, where there was much potential for disaster.  (Okay, that happened on Friday but it's still fresh in my mind.  For the record, he succeeded.)

If we manage to keep him out of the ER this year, it might be a miracle.

Guess who got glasses?  They look better in person, I think.  He just looks so old. 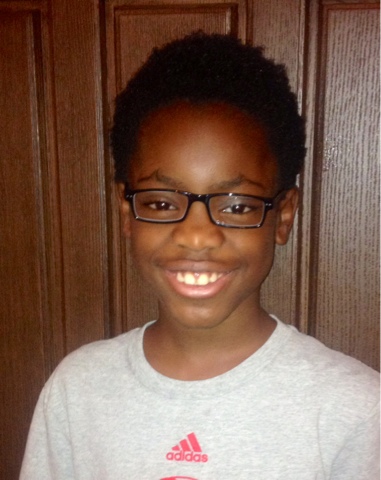 Email ThisBlogThis!Share to TwitterShare to FacebookShare to Pinterest
Labels: Kenson

This year, Zeke got invited to a local event at Memorial Stadium called Husker Heroes.  I'm not 100% sure who actually hosts it but the university hosts special needs kids and their families to an afternoon of games and fun featuring freshman athletes from the various teams.  All the kids got a bag of Husker goodies (pens, little balls, frisbee, etc.) and then got to go into the stadium via the Husker helmet that the Huskers always come in through.  The stadium was then full of all sorts of fun activities from temporary tattoos to face painting to hula hooping to musical instruments to tumbling mats and football toss games. The kids really had a good time.

It's been slow going downstairs since we started/finished the basement project last winter.  The spaces that were finished with drywall have had paint and doors and trim but we still had quite a few things left to finish up.  The nailholes in the trim all need filled and painted.  The doors all need painted as well.  And the family room and the boys' room had nothing on the walls.  I have slowly been getting the boys' room finished.  As you can tell by the photos, they've already added their own pictures via blue painters tape.

Email ThisBlogThis!Share to TwitterShare to FacebookShare to Pinterest
Labels: Houses

Kai turned two a week or so ago but it was the same weekend as our local Women of Faith event which I planned to take my mom to for her Mother's Day present earlier in the year.  So we shifted our party plans and waited until Labor Day weekend.  We partied at my mom's and were able to enjoy the day with my grandma, my aunt, uncle, and cousins, including our North Carolina cousins.

Kai is all boy, constantly on the go, running, jumping, and climbing.  He usually have multiple contusions somewhere from all of his exploits.  He hates to be left out, hates being told no, and wants to do things all by himself.  "I do!"  So basically he's two.

He still doesn't say a ton of words but is slowly building his vocabulary.  He knows our neighbor's name (Bruce or Boo) which may mean our neighbor, his wife, or their truck. Over Labor Day weekend,  he learned to say kitty (key), meow (m ow!), and Mia, which is the name of Grandma's dog.   After saying Kenson was one of his first words, he now refuses to say it and thinks it's a big joke if people try to get him to say it.

He loves animals, trucks, cars, trains, and construction vehicles.  He is starting to enjoy a few shows on the tv, including Thomas the Train and the Wiggles.  He can "sing" several songs including "The Itsy Bitsy Spider" and "Rockaby your Bear."  He also loves anything to do with water and is quick to find puddles or standing water.  He's also starting to show an interest in potty training and has gone potty on the toilet multiple times at his own insistence.

A few pics from the weekend.. 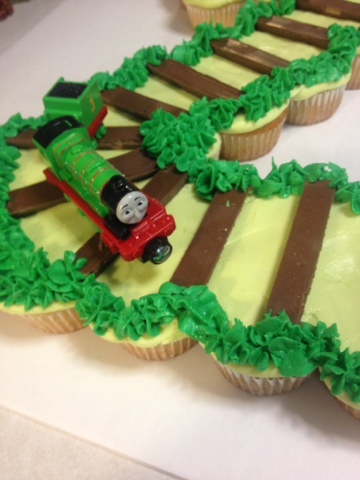