The Most Important Things

What to do with sassy kids who are struggling with bad attitudes?  It's just hard to be a kid sometimes.  Just like adults, anger and disappointment spill out into our words and attitudes, causing us to be negative and grouchy.

I thought we'd address that today by having my kids create a list of things that were really important to them while I made a list of of things that were really important to me.  I was going to create a list that showed my kids the characteristics I was hoping they would have as adults.  I wanted use my kids' lists as a conversation point, with the specific idea of losing some of those important things in connection to those bad attitudes.

I wrote my list and my daughter wrote hers.  Then we talked and I smiled at what I found.  The first item is a project she is working on.  The second is her lego sets.  The rest are all people.

People.  People matter most to her.  I smiled and told her what my original plan had been.  I told her I was proud of her for choosing people over things.  I shared my list with her, telling her about who I want her to become.  And then we picked plan B. 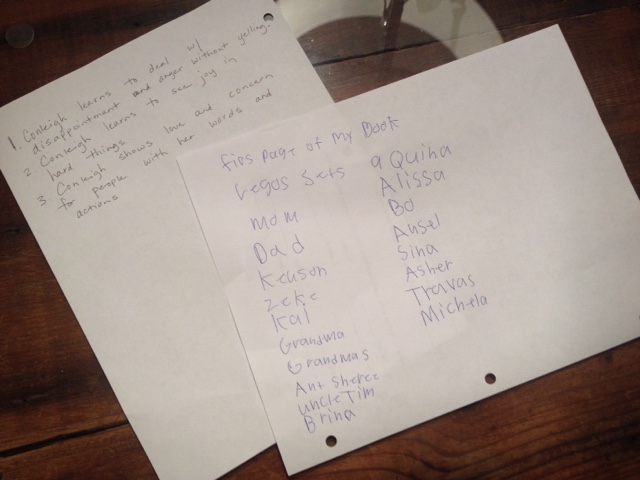 Kai is currently obsessed with babies and the word "Hola!"  The babies part is pretty natural.  He often will say "Oooh look!  A baby!"  However, he took it to a new level the other day thanks to his older siblings who often say "hola" as they greet one another or D and I.

D took Kai to Walmart with him where Kai spotted a baby in a shopping cart.  He shouted a cheery greeting of "Hola, baby!"  Cute little bug, right?  Made even better by the fact that the baby was Hispanic and his mom was nearby.  D said she just looked at him and said, "He speaks Spanish?"

I'm sure D's response of "Nope, just knows how to say 'hola, baby!'" was equally perplexing.

Upon hearing their dad tell that story, my big kids all made it their mission to teach Kai a bit more Spanish.  So now his favorite way of telling me hi or getting my attention involves the phrase, "Hola, Mamacita!"

The Gospel of Patriotism?

Maybe it was just the weekend.  Or maybe I'm just grouchy.  I don't know.  But the last week or so has left me biting my tongue and feeling that awkward feeling of wishing for the ability to give voice to my words without entering into a futile battle because Facebook conversations rarely leave room for quality discourse or changed hearts.  That statement in and of itself is part of the problem with Facebook.  We take to Facebook to share our opinions and once we encounter someone who doesn't agree with us, we use the distance of the Internet to engage in a pointless conversation.  The Internet creates this mist-like fog that separates us from our friends and acquaintances, where we literally and figuratively argue with a wall.  What that means is that one person issues an opinion, the other responds, the original poster issues a response, and so on until both parties are tired of the debate and move on.  No one has heard a word that the other has said and really the only time someone chooses to analyze what's being said is when another person jumps into offer support thus creating an analysis of agreement rather than a thoughtful analysis of all the content in the conversation.

The topic that's left me frustrated, saddened, and a bit disheartened? In Nebraska, where people bleed and die Husker football, we recently had three Husker players kneel during the National Anthem.  I know it's been somewhat of a national conversation since Colin Kaepernick took a knee.  When three of our own players made the same choice, that brought it close to home.  Suddenly the issue of race and patriotism walked itself into our front yard.

My initial reaction when Colin Kaepernick chose to kneel was not necessarily that of approval.  I thought in my head and said to my husband that it didn't seem like the right avenue for such a protest, that perhaps there were better, more effective ways to communicate the same message, in a way that might cause people to listen rather than argue.  I let it go at that.

Then, Saturday evening, three Husker players kneeled and Husker Nation lost their minds.  I've seen friends make known their own opinions via their Facebook pages.  I've seen the comments left on news articles, some of which were comments left by friends.  And I've walked away shaking my head because of the meanness, name calling, and overall attitude by both my friends and people whom I do not know.  The people I do not know cause my heart to break a bit but truly what really does a number on my heart is to see my Christian friends join right in.  It's not that I expect my Christian friends to be perfect.  It's more that it is hard to watch Christians choose patriotism over the gospel of grace and love.

In general, the irony of the disapproval is not lost on me.  People are quick to point out how these players are really just entertainers, contrasting them with real heroes like military personal.  That line of thinking is certainly one I think most of us would agree with.  However, what makes someone a hero?  Heroes are made because they choose the hard way instead of the easy way, because they found a way to do the right thing in the middle of doing their everyday, ordinary life.  Of course, a football field is not a battle field, and one would be remiss to think that playing football is just as difficult as being a soldier.  Of course, those football players could have chosen to enlist instead of play ball.   They didn't, and they are living in the place where God has them in this moment, and in this moment, they are doing something that is not popular.   The easy road would be to be a football player who only cares about his own ego and his own success.  The easy road would be to ignore the hard conversations that are happening in our country right now.  They are not choosing that.  They are choosing the hard, trying to make a difference within their spheres of influence.

Similarly, it strikes me as ironic when people hold up the freedoms we have in this country as hard fought by our military while in the same breath denouncing someone's right to exercise that freedom.  If we want to one of our country's greatest strengths to be the voice of its people, then we cannot tack on the caveat of people having that right but only as long as they do it in a way that we find acceptable.   It also seems like there is a component of supporting the person's right to protest but only if it's a cause we can get behind.  If an evangelical player kneeled for the National Anthem in protest of our nations' same sex marriage laws, what would be the response?  If a Catholic player kneeled for the National Anthem in protest of our nation's abortion policies, would we be as outraged?  Or we would applaud that person's bravery and willingness to stand up for what he believed to be right?  Is part of the issue that we do not believe in the merit of the protest because our perspective on race issues is so different from those protesting?

I have also been frustrated over the meanness and hate that seems to pervade the conversations.  Calling people idiots, ungrateful, disgraceful, losers, and spoiled brats is mean.  Using racial slurs, threatening to lynch someone, or threatening physical violence is hateful.  It is okay to share an articulate response to why you disagree with someone's protest.  It is not okay to offer up a 3-5 word comment that insults someone and only serves to incite similar comments.  To be quite honest, that's passive aggressiveness.  I do not understand why the topic of civility is even an issue nor do I understand why people continue to think such conversations about civility do not apply to them.  I wish I were just talking about people whom I don't know, people who have left random comments on news article but I'm not.

I'm hoping these words are slightly better than a rant, that they are a part of heartfelt and intentional dialogue not just throwing words into the air to prove who is most right.  Patriotism is so much more than an anthem or a flag.  For us as Americans, patriotism has to be about the ideals of our Constitution which include the right of people to protest and criticize even if it's done in a way in which we don't agree.  If patriotism is watered down into simply an action we do in regards to a flag or a song, then we are like hundreds of other nations that were or are ruled by corrupt governments, tyrants, and dictators.

I'll leave you with the press conference held yesterday by Michael Rose-Ivey, one of the three Husker football players who chose to kneel.  If you watch it and still see him as spoiled, disrespectful, or an idiot, I'm at a loss.  He is a man struggling to find a way to make a difference.  Listen to what he is saying. Listen not so you can argue your position but so you can understand his perspective.  You may not agree with the action he chose but to vilify him is a position I refuse to take.

World Kids and How to Get Girls to Move

Thanks, Aunt Sheree for the subscription to World Kids.  We got our first one today and pulled the map insert out right away.  Then we spent a good 20-30 minutes finding the places from the stories on the map.

According to him, you just say "I have to fart."  And then they move.  At least the girls at school. 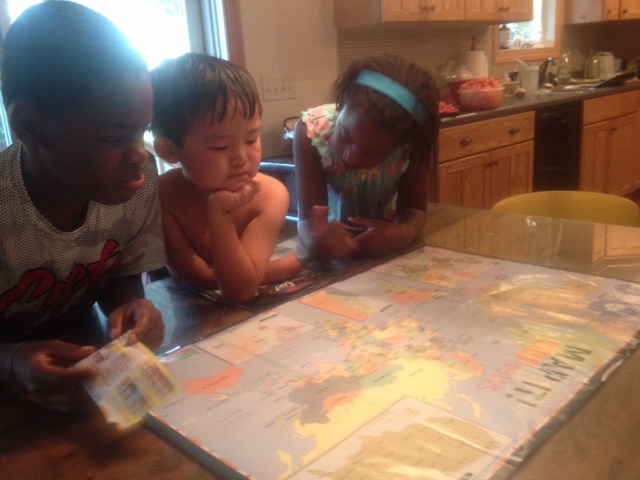 We have five birthdays within the span of 40 days in our family.  We celebrated each one a bit on the day, just within our family, but we waited until Labor Day weekend to celebrate with Grandmas and such.