As for the actual first day, Zeke had an amazing first day.  He had so much to tell me.  He saw a garter snake on the field and played soccer and basketball with Cole and Camden and some other people whose names he didn't know.  He grabbed my hand as we walked to the van and told me how he should have brought his lunch from home because they had cooked carrots for lunch.  (He hates cooked carrots.)  Then he was on to telling me that he already knew what he wanted for lunch tomorrow and that we needed to run to Walmart to get it.  When I pressed him more on this, telling him that I had things for lunch, he was quite insistent that we go to Walmart.  He couldn't tell me the name of what he wanted so I made my best guess.  "Lunchables?  Did you see lots of people eating Luncheables?"  Yep, that was it.  (I don't think I have every bought my children Luncheables but my kids constantly beg for them.  I ought to break down and buy them that as a treat when I head to the store on Thursday.)   He then proceeded to tell me how the only thing bad about the day was that it was a short day and that he wished it had been a full day instead of early dismissal.  He used his scissors and his glue and his teacher read like 10 books but he didn't remember any of them.  He was such a chatterbox.

As for his hands, that was the second thing on his list.  Lots of people asked and he chose to ignore them.  I asked him how he thought that would work since they might ask tomorrow but he changed the subject.  "Well except for this one boy.  I told him that a shark bit off my hands and he said 'really?'"

As to the big kids, they were a lot less chatty.  Surprise, surprise.  I did manage to find out what they did at recess and what they ate for lunch.

Baskets in the Water

Zeke has no true fingers.  He has a thumb, a half a pointer, and a toe.  I know this.  Yet, I never see him as a special needs kid.  He's so fiercely independent, so tenacious, so quick to learn new things.  His hands are just a non-issue.

I also generally don't helicopter parent.  I'm not overly sentimental when it comes to my kids nor am I much of a worry wart.  I love watching parents of graduating seniors who are so confident in their child and who are so sure of their role in giving their child wings and launching them out into adulthood.  Those parents, who truly are excited to see who their children are about to become, are the ones who give me a glimpse of who I hope to be in the next ten-ish years.

I've been on the playground in a smaller scale, where he interacts with other kids for the first time and generally, I don't think he's really been met with cruelness.  However, there are lots of questions and lots of comments and there is always the opportunity for someone to be just plain mean.  All of that makes him feel so different and no one wants to feel different.  As a teacher, I know his teachers will move heaven and earth to protect his heart just like they would for any kiddo.  But I also know that they are limited by their humanness, that they can't hear and see everything and that the playground is a hard space to monitor.  It's one of those moments where I wish I were there to fix it, to make whatever that may happen okay.

But I'm not there and even if I were, the reality is I do not possess a magic wand that sprinkles down fairy dust and transforms my children's negative experiences.  I cannot place my trust in my abilities as a mom or in the idea that my kids will have pain free, perfect childhoods.  Instead, I am going to have to trust that my sweet six year old is and has always been God's, that God created him, saw him in all moments of his life, and will continue to be present in his life, even on the kindergarten playground.  To borrow a bit from Ashlei Woods, it's a bit like Moses' mother putting her babe into the basket, casting him off into the water, believing that somehow her God would make a way.

"There comes a time – many times, actually – in the lives of our children where we have to put the basket in the water.  We have to let go and trust the plan of the Father.  The world is a scary place – a place where we fear our children could drown.  But we must remember that we have to let go so that God can draw them from the waters for His great purpose.  He has called us to be their parents, but they were His first. "


So off Zeke goes, into the basket, out on the water.  The prayers have been said and God's already working on the details.  May the scary playground of tomorrow be the place of God's continual presence.

Back To School Hair

I finally got Conleigh's locs retightened.  Holy buckets!  It seemed like it drug on this time for a month, as we did lots of short periods of working on it rather than a few longer sessions.  Anyway, she requested a side pony tail so we did flat twists back to a side pony and then used pipe cleaners to curl the ponytail.  Her curls in her ponytail didn't get quite long enough to dry so they fell a bit flat after a day but it was still cute. 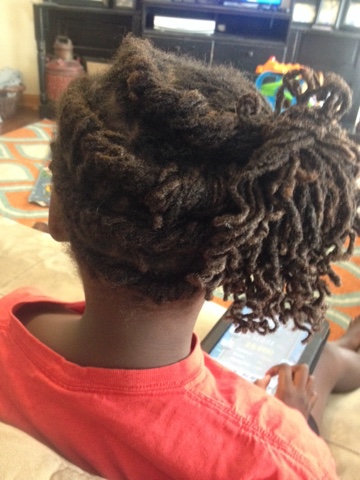 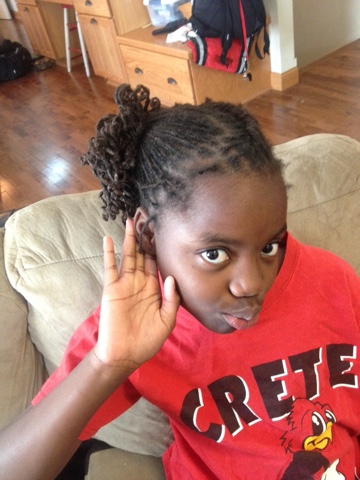 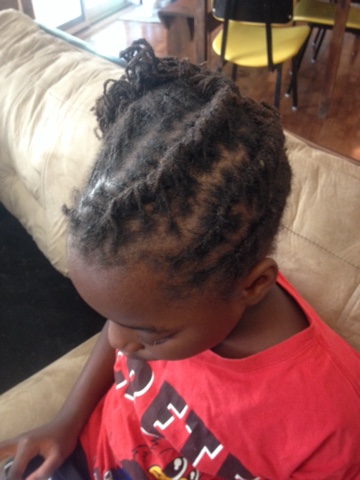 Email ThisBlogThis!Share to TwitterShare to FacebookShare to Pinterest
Labels: Locs

Zeke turned six.  I'm not quite sure why but it seems like in the last few months, he has gotten much more cuddly than ever.  He's never been a super cuddly guy.  Actually when he first came home, hie was pretty darn prickly.  But gradually he has let his guard down and it just seems like he's done a lot more melting into me and seeking out affection.  He's still a stinking smart little cookie who just absorbs everything.  He can read a bit on his own and I'm pretty sure that he knows all of his addition and subtraction facts.  He still loves sharks and ocean things but has also branched out into poisonous things like tarantulas, cobras, and scorpions.

Here are his three wishes: 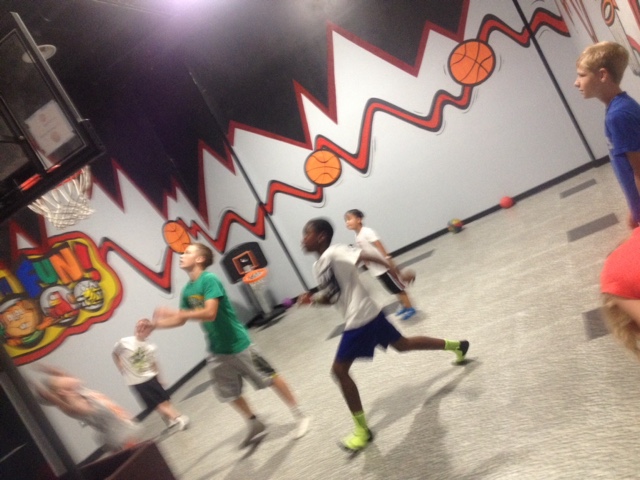 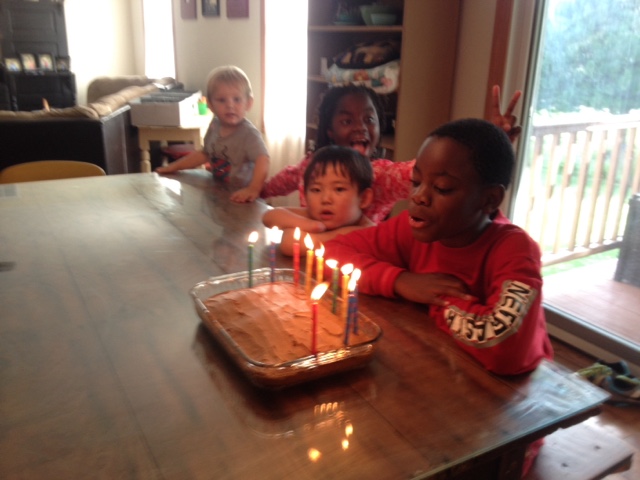 Kenson is ten.  That seems nearly impossible.  He is fast turning into a pre-teen boy.  He giggles at all sorts of pre-teen boy things and is testing out his own unique sense of humor.  He loves anything sports related from basketball to soccer to football to baseball.  His spent most of his summer playing baseball in the yard with Zeke and the neighbor boy.

For his birthday, he shared one wish with Zeke, being able to take a friend to an indoor place space.  One of his other wishes was to be able to watch tv all day long.  (See!  I told you!  Pre teen boy!)  I had to attend a training for a job I will be starting so that meant D was home all day with the kids on Kenson's birthday.  Seems like a day of tv watching was a great way for Dad to entertain at least one of the kids.  For his last wish, he wanted Legos.  (That's also been a theme of the summer.  The kids have spent hours playing Legos.)  He wanted something related to a police set he already had so this new set is kind of a swamp chase set, with a hoverboat, a tree house hide out, and another police vehicle. 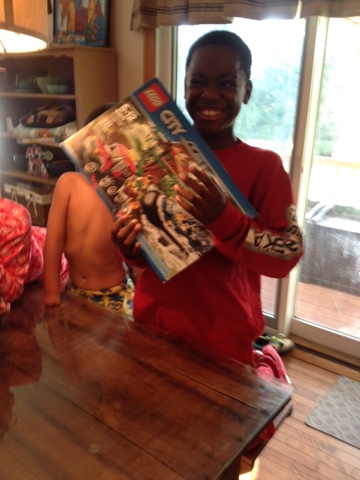