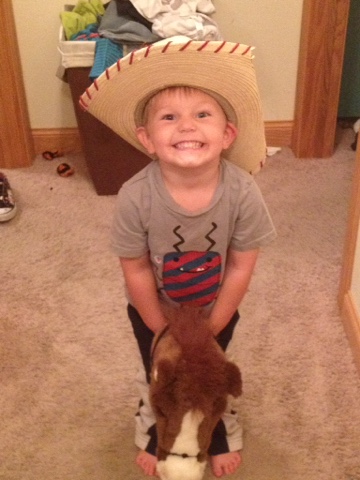 Don't let that sweet grin fool you!
Just today he tried to negotiate a trip in Dad's truck.
Dad said that he couldn't go with him and Kai's first response was "You give me pop."
That was then followed by "You give me pop and money."
As in "I won't throw a fit about not going if you meet my demands."
Such a conversation is only bested by his random comments about 15 minutes later of
"Me going to pop your head."

Pretty sure I've used that title more than once.  That's life, isn't it?  Halloween pics after the Thanksgiving ones?  Eh, why not?

Email ThisBlogThis!Share to TwitterShare to FacebookShare to Pinterest
Labels: holidays

Thanksgiving Past and Present

Email ThisBlogThis!Share to TwitterShare to FacebookShare to Pinterest
Labels: Zeke

Well, it's here.  Despite the thousands of Facebook memes, litany of SNL jokes, and angst of millions, America is voting today.  This election cycle has been a struggle for me.  It is not that I want a perfect candidate.  I have no illusions of grandeur, that I can only vote for a person with whom I agree 100 percent.  I'd just like to feel like there was a choice that involved real leadership.  I hate the way our nation is divided.  I despise that cronyism and materialism are a part of our system.  I hate that political leadership has such a shallow footing, where integrity and principled thought combined with compassion and genuine concern for people seem to be abandoned.

It is not that I think we all should agree.  On the contrary, our ability to disagree is what makes this a pretty great place to live.  It's just that I wish we were a bit less politic and did a lot less shouting about who is right and who is wrong and a lot more listening and compromising.

I honestly don't want that.  Of course, I'd prefer that whomever is elected shares some of my core values.  But America is a big enough place that it's really okay if the new president does not.  America should not be about my agenda or my opportunity.  Instead, my prayer is our new president meets God tonight.  Not because I want God to pull some divine puppetry strings as He puts the new president in his place but because I want our president to literally encounter the King of the World.  Not because I am judging the heart of a person, believing that he or she is not a Christian or is not as good of one as I'd like them to me.  No.  I want our president to experience a divine encounter, something that shakes our new president to his or her core, that leaves no doubt that our president has seen the very face of God and lived to tell about it.  The presence of God as the catalyst for a heart change, the glory of God as a reminder of the depth of this earthly kingdom, the spirit of God as an urging to return to working not for man but for the King of the World, where a president has the heart of a servant...that is really my prayer.